How to Choose Your Own Ever After... 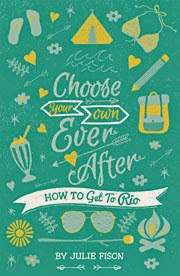 Cereal Readers is pleased to welcome a new Australian series out this month, called Choose Your Own Ever After. The series has been written for girls aged 10-14 years with a focus on realistic situations relating to friendships, family, school and budding romance. As in every day life, dilemmas arise for the main characters – situations in which they must make decisions and determine their own path. Each of the books is structured so that the reader becomes integrally involved in the direction of the story, making choices for the main character at critical points along the way and there by affecting the outcome of events.

The aim of the series is to engage girls in the sensitive tween age group – sandwiched as they are between childhood and adolescence – enabling them to read contemporary stories and to determine their own happy ending, all without straying into inappropriate topics or material. The series launches this month with two titles, How to Get to Rio by Julie Fison, and A Hot Cold Summer by Nova Weetman.

"...it is a tricky age to be...there are so many issues a girl
of this age faces as she works out her place in the world."

Cereal Readers had the pleasure of interviewing Julie Fison and asking her more about the series and her first of three books for the project, How to Get to Rio.

The 10-14 age group for girls – particularly 10-12 years – can be a tricky age to write for! What prompted you to write for this age group?

[Julie] Perhaps it’s a tricky age group to write for, because it is a tricky age to be! But it appeals to me because I enjoy the mix of playful, innocent fun and teen angst in this age group. There are so many issues a girl of this age faces as she works out her place in the world. Girls are so desperate to grow up, but they can still slip back into being young and silly. That’s something I had a lot of fun exploring.

Making decisions at critical times in the book is a unique element of the Choose Your Own Ever After series, allowing for variations of the storyline to develop. How did this idea come about?

[Julie] The publisher, Hardie Grant Egmont, developed the series to explore the idea that a girl’s future is in her own hands.  Situations will turn out differently depending on the choices she makes. In How To Get To Rio, the main character Kitty’s first choice is between going camping with her best friends or going to a beautiful beach resort with a popular girl that she’s just getting to know. Kitty is completely torn and I would be too! Her choice opens up different pathways in the story and then there are more choices to be made along the way. Sometimes the decisions are major, sometimes they seem quite trivial, but they all have an impact on the outcome of the story. How To Get To Rio has seven possible endings – quite a challenge to write, but I think the result is lots of fun for the reader.

The dynamics of friendships between girls in the tween/teen age group can be very complicated and intense: the fierce loyalties; the reluctance to offend; the desire to belong…but then also to break away from well-worn friendships that might not allow for growth or change. How closely did some of Kitty’s experiences (and those of her friends) echo your own from that age?

[Julie] I definitely faced all of those issues. I remember my first year of high school being a very testing one. I went from a lovely little primary school where we all played together, to a great big scary high school. Luckily I arrived with a gang of good friends that I clung to very tightly for quite some time! But the transition from old friends to new friends is something we all go through as we work out who we are, develop our interests and discover other people who share our passions. It’s a tricky path to tread at high school when groups are so clearly defined and our identity is so closely linked with our group. You have to be very brave to break out of one group and move to another.


"We normally get stronger from stepping...
...outside our comfort zone."

I had to laugh at one of Persephone’s comments in the book, “The advantages of having an older brother are that you get used to disgusting things and you learn to aim straight.”  That sounded like the voice of experience! Did you grow up with brothers?

[Julie] I had a younger brother and now I have two teenage sons. My house is often full of boys. So, yes, I have a lot of experience with disgusting things, noise, risky behaviour and accidents! How To Get To Rio was inspired by a recent family camping trip to Carnarvon Gorge in Queensland’s Central Highlands. It’s an ancient oasis of towering sandstone cliffs, Aboriginal rock art and giant tree ferns. We went with two other families, so that meant ghost stories around the campfire, endless games of capture the flag and some epic slime fights in the creek. The girls were outnumbered by the boys - three to seven, but they gave as good as they got. They definitely aimed straight when they had their brothers in their sights.

I could really, really feel Kitty’s embarrassment and awkwardness in certain situations. What did you use as inspiration for them, and why do you think it was important to include them in How to Get to Rio?

[Julie] Very cruel of me, I know, putting Kitty through those embarrassing situations. But I think readers will to relate to them. We’ve all been there – making a fool of ourselves in front of peers, and wishing the world would just swallow us up. I know I have! But it’s that fear of doing something embarrassing that often holds us back from trying new things. We normally get stronger from stepping (or stumbling) outside our comfort zone. I wanted to push Kitty into places where she felt awkward. Even though she gets embarrassed, she gets through things. Then as her confidence grows she takes more risks and gets rewarded.


"There’s a buzz around a popular series that kids
and teens tune in to and want to be part of."

What series books did you enjoy reading when you were growing up?

[Julie] I was a massive fan of The Famous Five, by Enid Blyton. I really wanted to be part of their summer holiday adventures. In fact I had a lot of holiday adventures of my own – mostly exploring rocky coves, fossicking for sea life and looking for treasure around the islands of Moreton Bay in Queensland. You might see the influence of The Famous Five in my adventure series for young readers Hazard River (Ford Street Publishing). The four kids in my books come up against rogue fishermen, dodgy developers and smugglers while holidaying at Hazard River. The books all have an environmental twist, but just like the gang in the The Famous Five, the crew at Hazard River has a way of turning everything into an adventure.

What, in your opinion, is the appeal of series for children and young adults?

[Julie] I think many children and young adults feel more secure about picking up a book that they know is part of a series. If they commit to reading a book, they like to know, that if they enjoy it, they can find more of the same. It’s much easier to go back to a series that they know they like, than risk a new book that they’re not sure about. I think children and young adults also feel like they are part of something when they read a series. It’s a bit like being in a club, where all the members are reading the same series. There’s a buzz around a popular series that kids and teens tune in to and want to be part of. I also think that children love a collection of any kind, and it’s genuinely exciting for them to add to their collection of books from their favourite series.

How many more books can we look forward to in the Choose Your Own Ever After series, and do you plan to write another book for the series?

[Julie] There are six books planned for the Choose Your Own Ever After series and I am writing another two. My second book in the series - The Call of The Wild is due for release in July. In that story, nature-loving Phoebe has to choose between going to a save-the-orangutan fundraiser or going to a party with her best friends. The story is close to my heart because I encountered orangutans when I was on holidays in Borneo. Sadly orangutans are facing extinction in the wild because their habitat is being destroyed to make way for palm oil plantations and mining.

My third book for the Choose Your Own Ever After series will be out in January [2015]. That book is still in the planning stages, but I can tell you it will be a summer holiday story with lots more tricky choices to make, awkward family moments, girlfriend dramas and boy trouble!

Thank you for having me on Cereal Readers. I look forward to visiting again soon!

Thanks for talking with us, Julie! Congratulations on your new book and best wishes for your upcoming titles in the series.

You can view series information and keep an eye out for new books in the series at Cereal Readers.com - Choose Your Own Ever After.
Posted by Cereal Readers at 05:48

Email ThisBlogThis!Share to TwitterShare to FacebookShare to Pinterest
Labels: Australian teen fiction, books for tweens, choose your own ending, choose your own ever after, friendships, girls, julie fison, middle-grade readers, series books for girls, YA, young romance